As we celebrate the Supreme Court ruling on June 26 for marriage equality for same-sex couples across the nation, we recognize what a huge step this is for LGBT older adults. At the same time, we know that we must remain committed to fighting the discriminatory practices that linger in the system.

Imagine being out and proud all of your adult life and then moving into a long-term care facility and having to go back into the closet because you don’t feel safe coming out to staff and other residents. Imagine being dismissed and disrespected when you advocate strongly for the rights of your same-sex companion while she’s being cared for in a nursing home. Imagine feeling like you have to endure homophobic comments from a personal care worker assigned to you because you’re afraid of how he’ll treat you if you speak up. 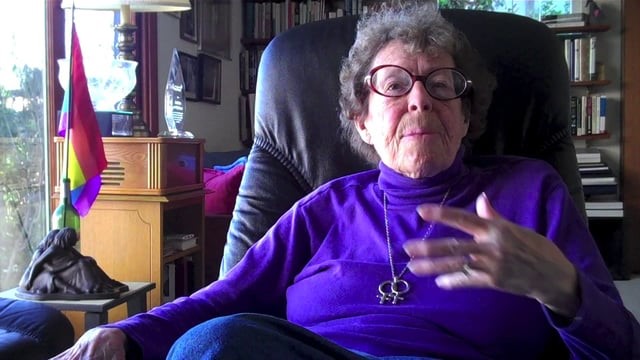 These anecdotes are not only true; they’re common experiences for LGBT older adults. And they’re all in our ground-breaking report, LGBT Older Adults in Long-Term Care Facilities: Stories from the Field. Published in 2010, the report is still making waves in policy circles. In honor of Pride 2015, we’re re-releasing a fresh version of the report for those who may have missed it, along with its accompanying video.

We’re proud that our report was the impetus for the San Francisco Board of Supervisors recent unanimous approval of an LGBT Senior Long Term Care Bill of Rights – the very first of its kind in the nation. Openhouse (a San Francisco nonprofit providing housing, community, and services for LGBT seniors) Executive Director Seth Kilbourn weighed in that the ordinance “established critical protections for LGBT seniors who are particularly vulnerable with­out immediate family members and other personal advocates to ensure they receive the highest quality of care in long-term care facilities.” We hope that other cities use San Francisco’s ordinance as a model to ensure LGBT seniors have the right to be safe and treated with dignity in every long-term care facility. That’s why we’re re-releasing the report now.

Stories from the Field is not our only work that has recently made a difference in the lives of LGBT seniors. We’re currently in the courts fighting discrimination against LGBT individuals on SSI married to a person of the same sex. We filed our class action, Held v. Colvin, in March to stop the Social Security Administration from collecting thousands of dollars from low-income married individuals who received overpayments because SSA failed to recognize their marriages.

As LGBT seniors disproportionately experience poverty due to a number of systemic inequities, as well as discrimination in health care, we’re proud of our work to make  quality health care accessible to all, without discrimination. We’re also proud of our efforts to preserve safety net programs, like SSI, for everyone, regardless of sexual orientation, gender identity, or marriage to someone of the same sex. And we’re proud—though progress has been a long time coming and still has a long way to go— that the U.S. is becoming a safer and more just country for LGBT older adults to live their lives.