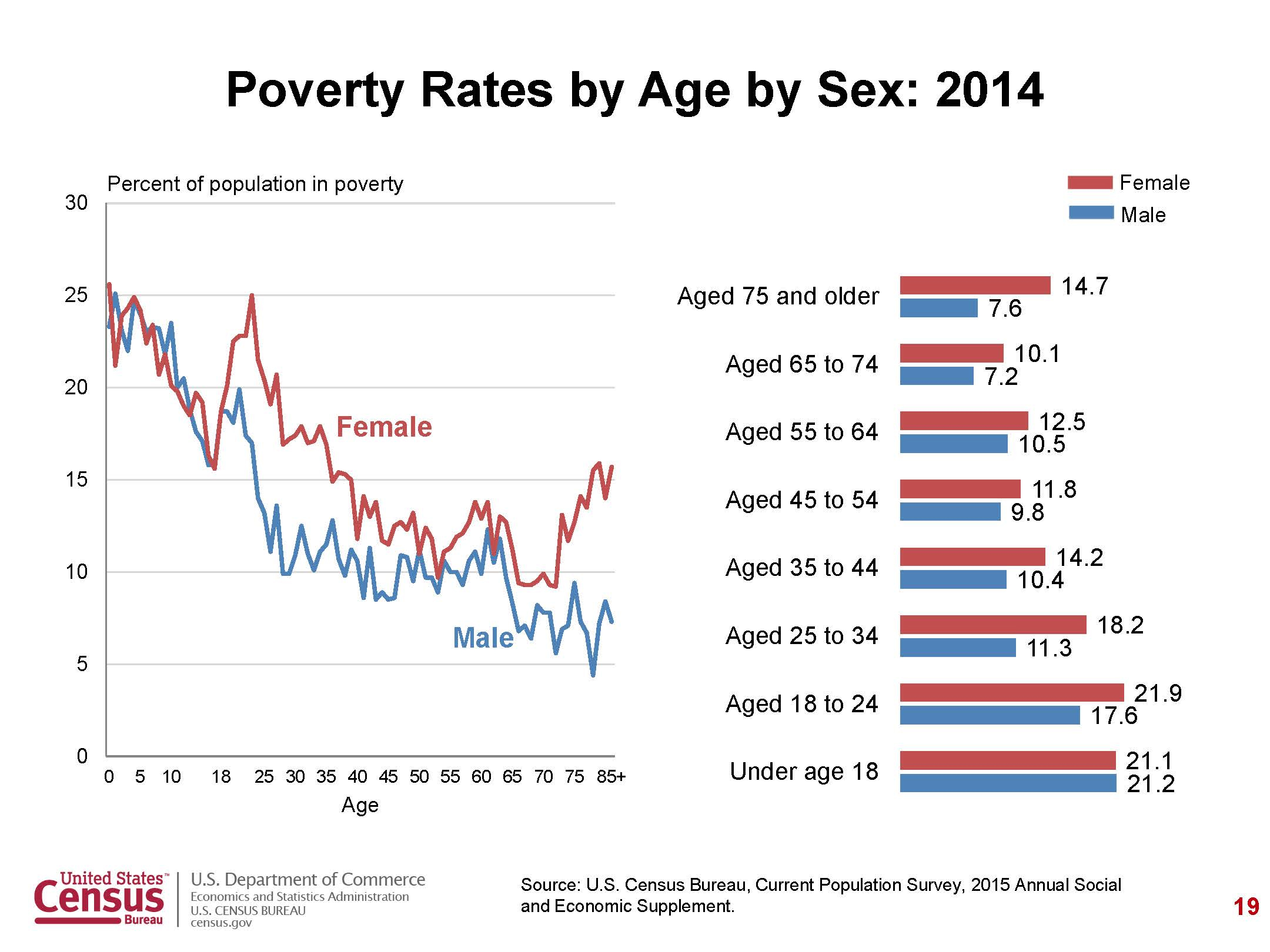 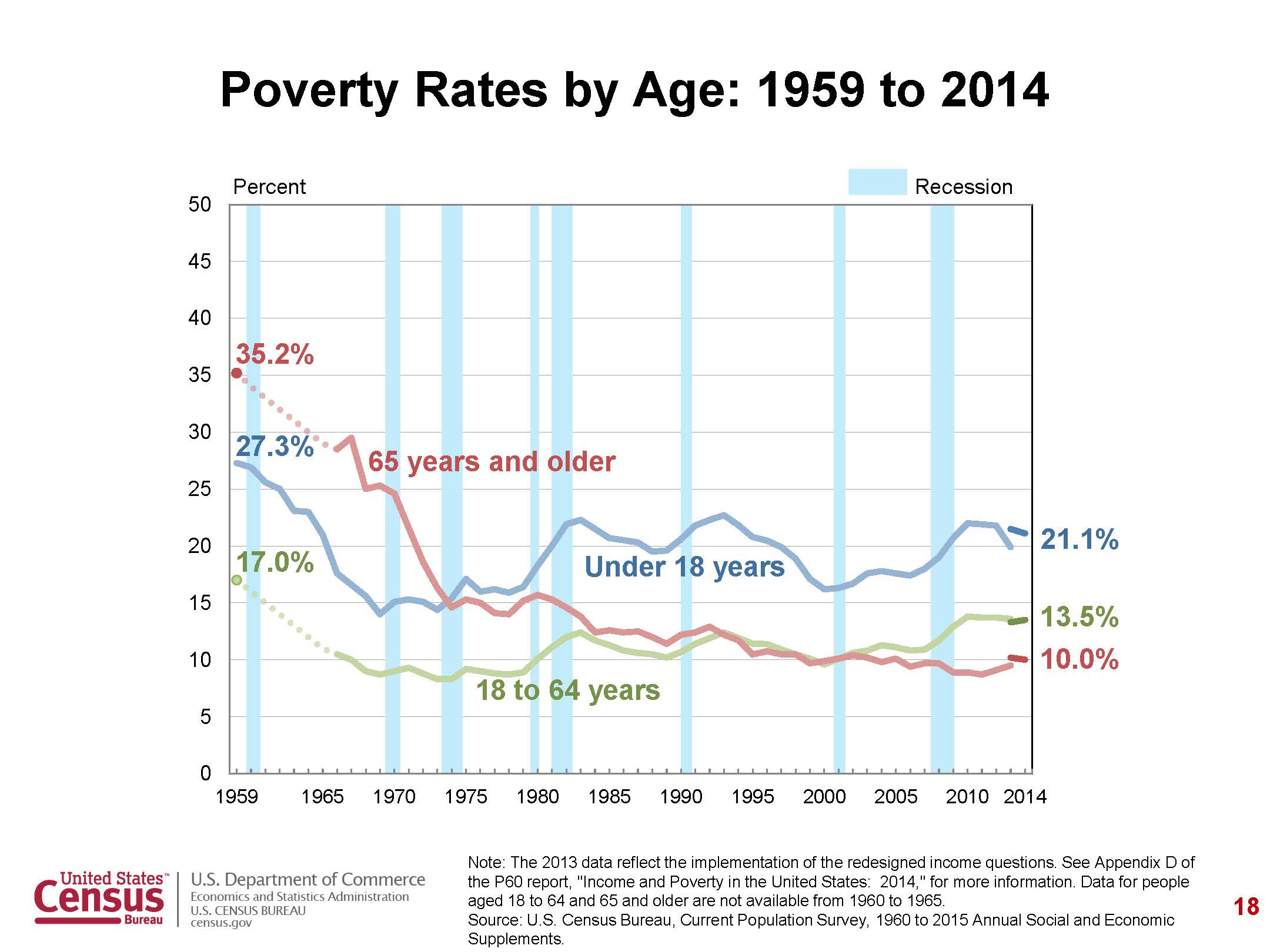 1. Women over 75 are at particular risk of poverty. According to the official poverty measure, 14.7% of women over age 75 live in poverty. This is nearly double the rate of men in this age group (7.6%). America’s oldest women also experience significantly higher poverty rates than women 65 to 75 (10.1%) years old. This data confirms what we already knew – that women are more likely than their male counterparts to be poor as they age. This is the result of a variety of economic and social policies that we have yet to address. This video provides a window into what life is like for older women struggling in poverty. Today’s data also demonstrates something else significant – that the older women grow, the more likely they are to be poor. This is an important reminder that any data that looks just at people 65 and over as a single, monolithic group will significantly undercount the challenges of poverty facing older adults that are in their 70s, 80s, 90s and beyond.

2.The Supplemental Poverty Measure continues to tell a very different story about senior poverty than the Official Poverty Measure. As in previous years, senior poverty is significantly higher when measured by the SPM. The SPM is recognized as a more accurate measure of poverty among older adults because, among other things, it includes out-of-pocket medical expenses. These expenses are generally high for older adults. This year’s data showed that 14.4% of seniors are living in poverty per the SPM versus 10% per the official poverty measure – a difference of more than 2 million lives. We must continue to push for measures that provide a more accurate reflection of the economic security needs of older adults.

3. Anti-poverty efforts, like Medicare and Medicaid, dramatically reduce senior poverty. This year, we celebrate the 50th anniversary of Medicare and Medicaid becoming the law (and the 80th anniversary of the enactment of Social Security). The Census report highlights a huge decrease in poverty from 1965 to 1975 for Americans 65 and older, demonstrating the poverty-fighting impact of our federal health care programs. Work to ensure these programs to live up to their promise of lifting the poorest Americans out of poverty continues to require constant protection against cuts, along with concerted effort to keep these programs updated and working well for our seniors.

Today’s report confirms that the numbers of seniors living in poverty are growing and that the problem of senior poverty, particularly for women, is an urgent one. Rising levels of income inequality across all age groups will continue to push more and more older adults out of economic security and into a life of poverty. The good news is, we know what works for this population. Programs like Social Security, SSI, Medicare and Medicaid have helped alleviate the impacts of poverty for over 50 years. These programs reflect a promise to all Americans as part of the War on Poverty. We’ve made progress, but we haven’t won yet. And now is not the time to surrender.

Kevin Prindiville is Justice in Aging’s Executive Director. He is a nationally recognized expert on Medicare and Medicaid policy and has served as counsel in several class action lawsuits protecting low-income senior’s access to public benefits.